Confessions of a Former Atheist – 2


At the end of my previous post, I shared a graphic. Ever since I gave my life over for God to run, I have studied hard. I studied the Bible, I studied others' works and everything I could get my hands on because I still sought the truth. The more I studied, the more I realized that I was alive at a very special time in history – the time of the end of all things as we’ve known them.

You see, I’ve learned that our lives have a beginning and an end. The same goes with all of creation. We’re all on a Space-Time Line that has a fixed beginning and end. The “time” before that was forever past and once the Time Line is finished, it will be forever future when time ceases to exist. The graphic I shared was a tiny part of the very end of the Time Line Continuum.

Now, before we delve into the chart and the subject of creation, I have to share with you in depth that I used to believe in evolution…until my husband wanted to raise show Guppies. Some of you don’t know what those are. Guppies are a type of small fish (about the size of large minnows) and there are some that have specific colors and patterns that are highly prized. I found out almost immediately that they don’t evolve into those colors and patterns; they have to be carefully bred and ruthlessly culled to achieve show status. All my teachers and the talking heads on all the TV shows spouting evolution’s premise that we’re all getting better and more advanced flew in the face of the reality I saw – that if left alone these fish morphed back into their pond minnow state. Then I started looking at our pets – cats and dogs. They, too, had been carefully bred in order to morph into the different breeds and that some of those were so inbred that they had great physical problems. It just didn’t make sense. The more I looked, the more things pointed to an intelligent creator who put things together. A friend of mine asked me once, “The combustion engine for an automobile is much less complex than the human body. If you put all the parts of that engine into a washing machine and ran it for a million years, would all those parts come together to make that engine?” Definitely not!

I have come to believe that everything we see was created. There is an infinitely intelligent Being out there who put it all together and like it or not we are part of that creation for the Being to enjoy. As an artist, I am continually compelled to create a painting, drawing or whatever else visual. It made sense that somewhere beyond the universe there is a creative great being who wanted to put something together for his enjoyment. That Being lives outside the Time/Space Continuum that he put us in, so he can view it start to finish – sort of like those who put together train sets like I remember my father had when I was a child. It had moving roads and sidewalks and several tiers of trains. If we were someone on the sidewalk, we would only see the things moving around us, but as the creator we would see it all at once and would control it all out of sight from those on the sidewalk of that train set.  That is the illustration accompanying today’s post to illustrate how we are like those stuck in the train set/time line.

I have in recent years learned that if you can’t see or believe in something, that doesn’t mean that it doesn’t exist! It was a really hard, painful, expensive and time-consuming lesson. I didn’t know for over a year that I had cancer. I didn’t believe I had cancer, I didn’t see cancer, but yet it was there lurking and growing in my body. Only when it grew large enough to start protruding and becoming painful did I know that something was wrong and that something was there. I know it’s a negative example, but even if we don’t believe in a great intelligent creator or see him, that doesn’t mean he isn’t there. Even if we can’t see electricity or air they’re still there and working behind the scenes like that creator-being.

Way back on the time line, people started calling this great intelligent creator God. Those who believed him were able to communicate with him, and some were given messages for the people around them. Some were even privileged to see his other created beings, the messengers that some call angels. This creator being God stepped into the Time Line on occasion to alter the course of what we call history in different ways. I won’t go into a lot of detail as most of these have been recorded both in the book called the Bible and other historian writings. You can easily check them out for yourself.

The graphic chart that I put together is what I understand will happen at the very end of this Time Line. I know beyond a shadow of doubt that this is going to happen very soon, probably within my lifetime – and remember I am one of the earliest Baby Boomers. Since I have tried to help you understand why I believe as I do, next post I will start sharing this graphic chart’s meaning. 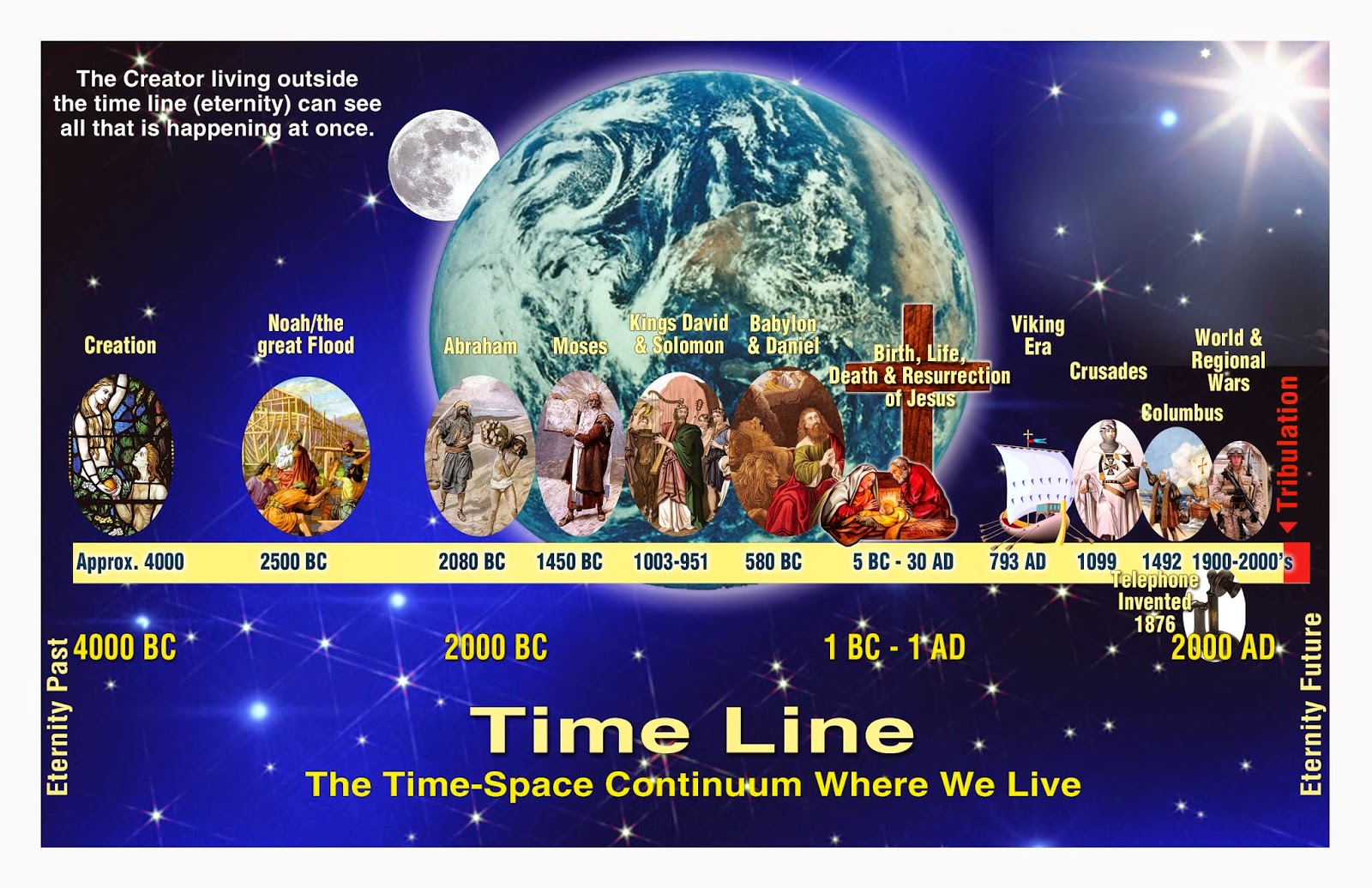